Economic freedom in Berlin vs London


Does freedom mean something different in Germany than in the UK? 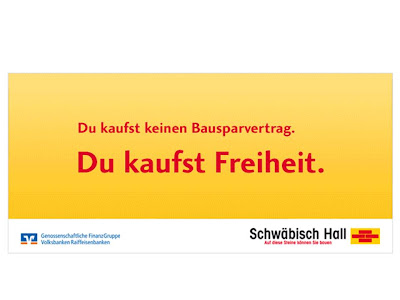 Buying freedom
Just came across this little advertisement on the website of a German bank. It says "You're not buying a mortgage saving plan with us. You're buying freedom."

How on earth can a mortgage savings plan set you free?
At first I couldn't believe my eyes. How could anyone be so audacious to claim that saving towards owning your own house made you free? And if it did - what kind of freedom was that? (On a sidenote - it's very interesting to see what images Google Imagesearch returns on "freedom") If everything went really well for the next 30 years - i.e. you wouldn't lose your job, get divorced, long-term sick etc etc - this could potentially secure your financial security and social status in later years because you wouldn't have to pay rent on your house when you were a pensioner. But surely the trade-off for this security would be in fact freedom. Signing a mortgage contract that determines you to pay a substantial amount of your earnings for at least 25-30 years of your life cannot but reduce your options to do other things. It ties you to a place, it ties you to a job, it might tie you to a partner or lifestyle. Of course you can opt out - sell the house, move away, change job, get divorced, go to a kibbutz. But signing that mortgage contract will up the ante for any such move and increase the price for regaining your freedom to choose another path.

Throw increasing divorce rates into the mix
On top of it, divorce rates in Germany (in line with other Western countries) are on the increase. Try reminding a divorcing couple fighting over who gets how much of the property value that they bought freedom when they signed that mortgage savings plan years ago. Then seek cover.

Freedom from vs. Freedom to
On second thought however, it made me wonder about whether I was just not getting what kind of freedom they were talking about - freedom from want or freedom of choice (Wikipedia lists them as two different interpretations of economic freedom). In London I greatly enjoyed the many choices available - from food, to flip flops to lifestyles and education opportunities. You get taxed relatively lightly (33% of your income which is relatively low by European standards) so you get to keep quite a bit of your income to spend on all those choices of clothes on Oxford Street etc etc.

In fact I left my hometown in Germany because I felt I wasn't free to make the choices I wanted to because my environment wouldn't accept it. Having spent the last 12 years making lots of choices about how I wanted to live I arrived in London and found that making certain kinds of choices can cost quite a bit of money. Especially the choice of having a child was a pricey one. On that one I got to the point where I thought - if I had wanted to have sufficient money to raise our child as I'd like to we should have waited another 5 years. Obviously it was too late to change and we were left pretty choiceless and unfree in London and so moved to Berlin.

Which freedom is better?
In Berlin, rent and childcare are very cheap by London standards, and life is also still quite affordable. It's made possible in part by high taxes which fund public subsidies to childcare and rent controls. While the choices available in Berlin lag behind the dazzling array of things and opportunities available in London, the financial security enjoyed in Berlin allows you time to ponder leisurely what you really want to do. Furthermore there is now lots of research throwing doubts on notions of free will when faced with choices - it seems that the more choices we are faced with the less we exercise our free will and instead go for the easiest option. Therefore I would argue that it is the (of course relative) freedom from want that allows you to make more sustainable choices. I couldn't say which freedom is better - I think it differs per person and per lifestage. In any case, once you've got a child freedom from want is just so much more important that having lots of choices available to you.

Coming back to the audacious advert from the beginning - I guess they're trying to refer to the freedom from want and of course, as this ad is targeted at an under-25 audience, freedom sounds way sexier to that audience than security. But even then it seems proper lame to try to sell under-25 year olds mortgage savings plans rather than encouraging them to go out and experience the world in all its messy glory, make mistakes, burn their wings and go crazy. When else will they have better opportunities to do so?
Posted by Tobias Stapf at 13:41 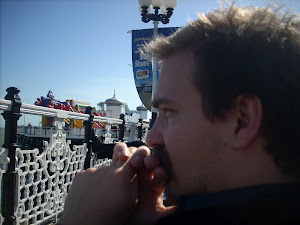